For full information on the Baby-OSCAR trial, please see the trial protocol below: 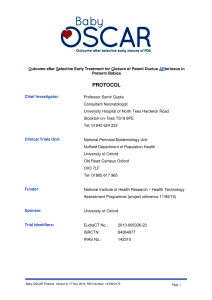 In term babies, the Ductus Arteriosus (DA) vessel closes spontaneously after birth when breathing is established and is structurally closed after a few days. However, in a large number of preterm babies, the vessel does not close spontaneously resulting in a condition known as Patent Ductus Arteriosus (PDA). Around 7,000 extremely preterm babies (<29 weeks of gestation) are born in the UK every year. In 40% the PDA will fail to close spontaneously even by 4 months of age. PDA is associated with a number of serious and life-threatening short and long term complications. Traditionally, medical treatment is instituted as prophylactic treatment (within 24 hours of birth) or symptomatic treatment (usually 5−7 days after birth). Prophylactic pharmacological treatment of all preterm babies unnecessarily exposes a large proportion of babies to the potentially serious side effects of drug treatment, when their PDA would have closed spontaneously. Symptomatic treatment on the contrary delays treatment while waiting for symptoms to appear and could result in a loss of treatment benefit as irreversible damage may have already been done.

The aim of this trial is to examine whether the pharmacological closure of a large PDA (identified by echocardiography) in extremely preterm babies whilst asymptomatic has a clinically important impact on both short and long term health and economic outcomes.

Babies will be considered eligible for inclusion in the trial if they are:

Babies will be excluded from participation in the trial if they have:

The recruitment target is 730 babies. The study was piloted in 5 neonatal units during July - December 2015, and has been rolled out to further 27 sites across the UK in spring 2017.

NPEU News: The Baby-Oscar trial have published their study protocol